Though it felt a little like Nashville, I really was right here in Las Vegas.  I had the opportunity to spend the weekend with my husband and some of his guests at the Aria Resort on Sunday and Monday.  It is the one time of year that I am a country western music fan, when Las Vegas plays host to the Academy of Country Music Awards and the Artist of the Decade.  In 2009, I was fortunate enough to attend the Artist of the Decade when the Academy honored George Strait.  George and Johnny Cash are two of my faves, the rest I know if they are played on the mainstream stations.  I have nothing against country, I just never really grew up around it or loving it.  I take that back, about 15-20 years ago, I really did take it personally.  I hated how sad and victimized everyone sounded singing their country songs.  Now I have a true appreciation for the music and the talent, as there are so many talented country performers whose voices could bring down a stadium and guitar licks could kick some serious rapping ass.  This year, Brooks and Dunn

were being honored as the Artist of the Decade, and though I was not familiar with most of their music, like I said, it’s hard not to be awed and inspired by truly talented people.  If you want to catch a glimpse, it airs sometime in May on CBS.  It was a pretty spectacular show, especially if you are a Brooks and Dunn fan.  As they are being honored, they get to sit on stage and listen to their music performed by top country vocalists like George Strait, Keith Urban, Kenny Chesney, Reba McIntyre, Taylor Swift and Tim Mc Graw.  The singers also tell personal stories about their relationship to the duo, which I love because I feel like it gives them a human quality, it makes them more touchable. 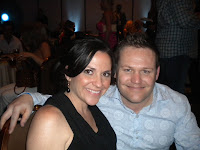 RockStar Mom and Hubby at ACMAs

The one thing I look the most forward to when I get the sweet opportunity to stay at the Aria Resort…putting on my jammies and getting into bed.  I have never slept in a bed more comfortable.  It is literally like sleeping on clouds.  The mattress, the sheets, the pillows…it was the one thing keeping me going Sunday night as my belly was starting to ache and my feet were begging me to please take off the ungodly three inch Badgley Mishckas I was sporting.  My exhausted husband was invited to join some of his guests downstairs in the casino, while I was able to so politely opt out due to my “condition”.  The truth was that I wanted to lay in that bed and never get out!  After a quick trip to my favorite French bakery- Jean Phillipe Patisserie- for a Nuetella and banana crepe to-go, I practically bolted down the long corridor (damn this hotel is big!) dodging drunken tourists left and right, through the Sky Suites entrance and up the elevator.  Another 5 minutes more and I would be approaching my hotel room with the most insanely comfortable bed in town-including my own!  I have never more gladly traded a dress, maternity Spanx

, and three inch heels for my pjs and a repeat face wash to make sure all the spackle from the airbrushing was off.  What else is so amazing about these rooms is the remote control everything.  There is basically a “brain” that controls the lighting, the blackout curtains, music, television, turn-down and maid service, and billing from the comfort of your bed.  When you first walk into the room after check-in, the curtains open and the television prompts the music channel to turn on…it’s a very luxurious experience, and you are immediately reminded that you are more in a model home on vacation versus a stinky, smokey Vegas hotel room.

So, back to the bed.  After drooling over this bed for months now, I finally decided to do some research and found they are actually available for purchase…brand new ones obviously, not the ones from the hotel rooms.  The whole set up is from the mattress to the pillows.   Thinking a possible push gift from the hubby?? I mean, I am having twins after all. I’m going to need a great place to relax and get very little sleep for the next 10 years.

I was in bed by 10pm that night, and stayed there until 10am the next morning. The only thing keeping me from staying there all day was the fact that I actually had to go back to reality for a few hours to my OB appointment. I was even late because I was finding it a challenge to talk myself out of bed. Bed was amazing…I think you got the picture.

Next indulgence…cabana by the pool. The day promised to be sunny and hot, and I promised my skin some much needed Vitamin D. We were invited by my husband’s guests to shar
e their cabana with them at the pool. I couldn’t wait to check it out as it was the one amenity at Aria I had not experienced yet. (Will chat about the spa next time, as I was not able to partake this time around. The spa is on my top 10 list for best spas around the world). Though his guests, the Cabana Manager and the Cabana Host spent the first 15 minutes complaining about their happenings at the pool on Saturday- apparently there is a section of the pool that turns into a club on Saturdays and anyone (meaning non-hotel guests) can attend if they pay a cover charge or the exorbitant amount for a cabana or table to listen to an over-rated European house DJ spin monotonous beats for several hours. Not only was the music and unwanted guests affecting the actual hotel guests who were unable to relax by the pool, but the spa is located directly above the said sectioned off pool and the insides were bumping to the house beats as well. I assured them that management would surely look into this situation, as clearly they did not want to affect their gaming and hotel business-it’s too sensitive right now to ignore these minor, yet major disruptions to paying hotel guests-as if I have some insider pull to management. But I was reassuring nonetheless.
The overall feel of the Aria pool is that of simplistic and modern. Compared to the decor in some of the more traditional hotels like Mandalay Bay, MGM, and Bellagio, it lacks the tropical or European feel that many of them try to recreate, and some have done an excellent job in doing so. Though a bit more streamlined and trendy, it is what you would expect given the rest of the hotel is donned in the same decorative duds. The cabana was nice. It was a little crowded, as their is little privacy between each cabana. The cabana itself boasts a small flat screen TV, a basket full of munchies and small sample sized tanning oils, and a fridge filled with water, juice and an Evian spray mist can. You can also bring your own iPod and attach it to the dock to play your own tunes. A Cabana Host is on-hand to fetch food and drinks, and check your towels for wrinkles. Whatever problems there were on Saturday were not present at all on a Monday afternoon. In fact, I almost cancelled my hair and make-up appointments just to stay a little longer and lounge, catch up on my Vogue, and sip some lemon filled iced water.  But alas, duty calls, and someone had to make me look pretty.

My final indulgence of the trip was getting to eat a quick dinner before the Artist of the Decade show at Union Restaurant and Lounge.  One of the more trendy, less stuffy restaurants and bars at Aria.  It was created and is ran by the Light Group, who also own and operate many of the nightclubs and restaurants in other MGM Mirage properties.  Just as their counter-partners, Fix and Stacked, Union shows signs of similarity, which is fine by me because I love the menu options in all three places.  It is easy to order several appetizers for the table to to share that would easily replace a meal.  If you’re still hungry or want more sustenance than that, there are great menu items like fish and steak with side dishes a la carte.  Since I had been craving their Crispy Duck for some time now, that was my choice for the evening, though everything we ate was very good: Union Salad, Spicy Yellow Tail Crunch, Salmon Carpaccio, and Tuna Tartar were available for everyone at the table.  I skipped the raw fish and ordered myself a virgin mojito instead.  It was the perfect ending to a delightful stay!

1 thought on “Stay-cation's all I ever wanted, Stay-cation had to get away…”

This site uses Akismet to reduce spam. Learn how your comment data is processed.